Here are some very old pictures of Martin and Bruce and our potted history! 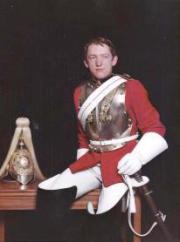 Martin in his uniform 'The Life Guards' after a London Parade

Martin served as an NCO in the Life Guards in The British Army before taking up the sculpting tools and making some off the best figures the hobby has seen. He lives and works in Northumberland and has known Bruce Murray for about 20 years. He produces figures for the well known Heritage range.

He has sculpted for himself and many companies over the years and his involvement in the world of Toy Soldiers goes back longer than he would care to remember!

Bruce In BOAR in the late '80s

Bruce was commissioned into the Royal Irish Rangers with a Territorial commission and served briefly with the regular 2nd Battalion in BAOR, West Germany in mechanised infantry as a Platoon commander and company second in command. He then moved to London and was a platoon commander in The London Irish Rifles (V) for a couple of years, before moving to the North East to take up his profession as an Architect. He then joined the 6th Battalion (V) Royal Regiment of Fusiliers (The Northumberland Fusiliers) and finished as Regimental Signals Officer after 7 years of service.

Bruce lives and works in Northumberland in the north of England, not far from Martin.

Bruce has been a collector for over 30 years and retired form Architecture some 5 years ago becoming a full time painter. He has been painting professionally for about 10 years. He paints for Morgan Miniatures, Warlord Games, Offensive Miniatures and Miniarons in Spain, amongst others. He is a keen collector and wargamer. 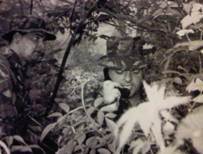